Going to be quick here mostly because I don’t have much to say.

“Listen to the fireplace roar.”

Orthography is, in its simplest terms, how you write a language. You probably don’t think of it much, but the written word is in your face all day. It probably becomes invisible to you until confronted with the foreign. Arabic, Hindi, Cyrillic, Greek, Japanese, Chinese characters stand out because they are intrinsically meaningless to a non-speaker, or should I say non-reader. It takes time and effort to learn and eventually see through the new script. But we also rarely think about how even the same alphabet is used for different languages.

For instance, I’ve posted quite a bit of Irish on here. One of the things that makes Irish so strange and so hard to pick up is that it is essentially incompatible with the Latin alphabet. Some things are easy, like mór is pretty easy to figure out. It’s sort of like more in English. What about mhór? Can you figure out that it is like war English? Or are you stuck on that ‘h’ in the middle? What about Maidin mhaith? Maiden wath? What about “mazin wa”?

H does weird things in Irish.

Orthography is also important in translating, specifically in what is called transliteration. Transliteration is taking a language from its native orthography and putting it into a foreign orthography. When I post translations here it is always in two forms of Latin Orthography – the extended and the simplified (basically one that I use when able and one that is better compatible with reddit and this site).

Some languages are easy to transliterate. Usually because they use similar alphabets to ours. Take German, which uses an extended Latin alphabet. Fußball is easily made Fussball. Bäume is easily made Baeume. But what about Chinese? Or Korean? That gets a little harder.

Anyway, Hadysh is pretty easy to transliterate. It uses a very “shallow” orthography. That is to say most letters correspond 1:1 to letters. That isn’t 100% true, but compared to most languages it is. Today’s word is  ƿabál, which can also be written hwabail.  Both are pronounced the same, but I think that the first is significantly more concise.

Hadysh is an alphabet in the truest use of the word. That means individual glyphs (letters) must be combined to create a syllable. This is compared to abjads (like Arabic), abugidas (like Tamil), and syllabaries (like hiragana).

In an abjad the vowel sound is often not written. In an abugida the vowels are marked, but often as a part of the consonants (think Tengwar if you are familiar with it). Syllabaries use a single glyph for each, distinct syllable.

Hadysh started out as a abugida but eventually transitioned to an alphabet (though can easily still be written as an abugida, and usually is for religious and ceremonial reasons). In-world the shift occurred  when writing became cheaper and more in-demand and then was formalized with the creation of the printing press. Basically it was easier to print words when you didn’t have to worry about the placement of vowels over consonants. That explains why vowels are simple (e.g. “=” for /a/ and “v” for /ɛ/) with much more complicated glyphs for the consonants.

Some sounds retain their old abugida versions. Diphthongs and nasalized vowels still appear over the letters “y” and “n” respectively. You can see a diphthong in the example above, the three apostrophes over the long symbol represent the /a/ and /ɪ/ sounds that make up the diphthong.

Like some alphabets it lacks a distinct “upper” and “lower” case.  There are also hand-written versions, though I have yet to work on a cursive script for the alphabet.

I have chosen this word specifically for its use in a little translation fun I’ve had. I’ve translated the second-ish stanza of An die Freude, the words that go along with Ode to Joy.

So here is An die Freude translated to Hadysh and in the long-form of Latin: 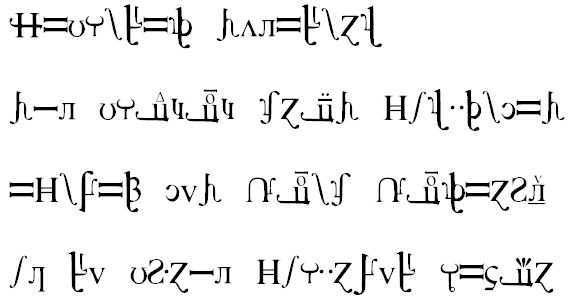 A big question that is nearly always thrown at a conlanger, regardless of skill, is “how do you create vocabulary?”. After-all the whole point of Lexember essentially is to beg that question.

So how are Hadysh words created?

Mostly with me pounding away at a keyboard while consulting a “sound library” document that I keep in order to have some rules on what sounds can follow what other sounds. I also try to keep certain things in mind. Simple concepts generally have simpler words. Generally. Complex concepts generally have more complex or compound words.

We often don’t think about compounding as a way to build vocab, especially in English given we usually keep the words physically separated. The other day I was talking on a thread about “hyper specific foreign words” when I mentioned English has this too. For example, in English, we have a word that means “to go crazy because you’ve been stuck in your house too long because of bad (generally cold) weather” – cabin fever.

Hadysh, given that it is vaguely Germanic, also compounds many words. My favorite so far is Sofyūdršaled (Sofyuudrshaled) which literally means “drawing of the moon” but actually means “caricature”, the implication that the artist is drawing from a dream or bad memory.

Today I was translating the line “You really are an ass, just like your father” and the words that came up were “ass” and “father”. Hadysh usually creates gendered words with prefixes that mean “male thing” and “female thing”.  So “father” would be “male parent”. That means I’d have to come up with “parent” and then “father” and at that point I might as well create “mother” and once I’m that far why not create “papa” and “mama” as well.

After all, that’s what people actually say, right?

Oh? And the line that started it all? 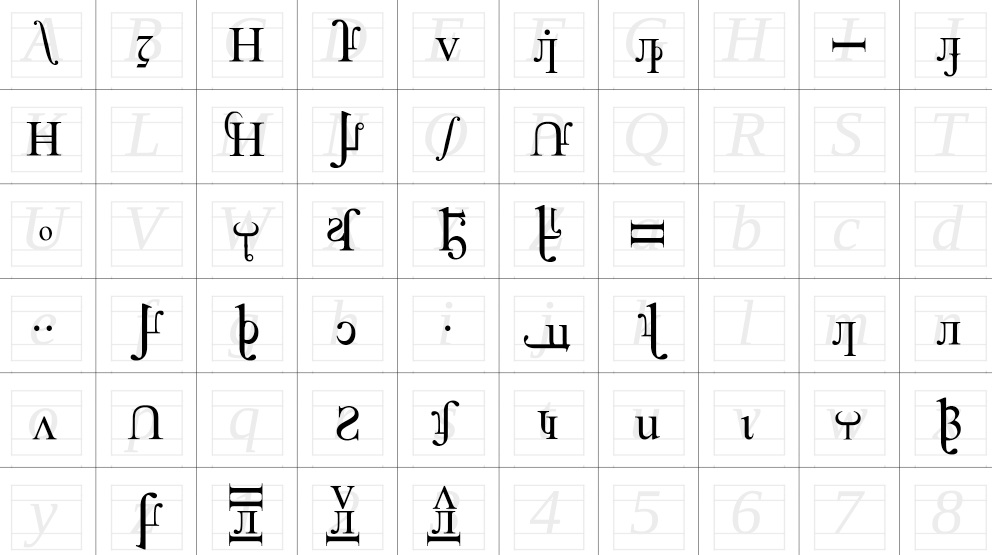 Good evening everyone. There was a fun little challenge on /r/conlangs to translate minimalist movie posters, so I thought what the hell and we’ll do that instead of mining for quotes or anything like that. 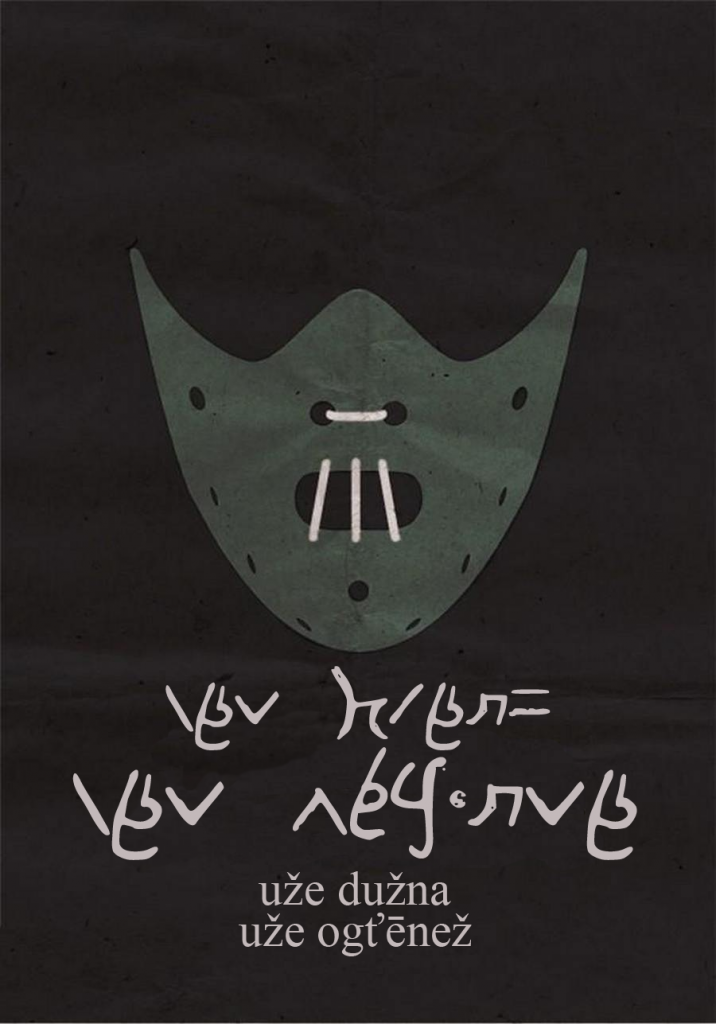 Going to be brief tonight, spent a bit longer on this than I had hoped and created a number of words for a Hjalmar Söderberg quote.

I know I said I wouldn’t do this every day, but consider this something for day #2. Eventually I’ll fall behind, aye?

It is important to recall that Hadysh is a conlang intended to be spoken by one of the peoples from my books, specifically it’s the  native language of two of the main characters – Rozenn and Einar. As such there are bits in a language that don’t always act logically or need to mean logical things, so that’s where today’s word comes in.

Today’s work is žnix (zhnix). I might drop the extended Latin and stick with the mobile-friendly version. Not exactly how I wanted this to work, but there you go.

(There is love and life in Hadyrland, as in death; old Hadysh saying)

I am not going to post for Lexember everyday, so sorry if you thought I was. I will try to post as often as I can, so don’t worry, but like with NaNo, I don’t exactly need the weight of another month-long project weighing down on top of me.

A while ago I posted about my conlang, Hadysh, and we covered some basic form and grammar that existed in the language. We also went over IPA and how to read the little squiggles that help us read a foreign language.

I scrapped all that work, so don’t count on understanding where I’m coming from now, however, this new iteration is just as much fun and just as crazy looking. I hope those of you who enjoy languages and learning languages will enjoy this as well.

I will provide translations for sentences, as in the past these will constantly be in flux, so while I desperately hope they remain consistent they might not as my ideas evolve and smooth out. This is a work in progress.

However; I will avoid breaking things down – maybe in time you can see the method to the madness, maybe you won’t. Grammar and quirks will get discussed in later posts, potentially in more detail.

(I love you with all my heart)